How to calculate a Climate Decomposition Index (CDI) 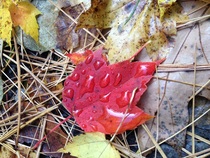 A CDI is a multiplicative function that describes the effect of monthly variation in temperature and water on decomposition. Such functions are used in the DAYCENT and Century ecosystem models, as well as in the Adair et al. (2008) decomposition model. Click here for more information, including how to calculate it. 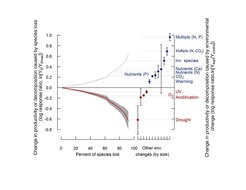 R code for performing a nonlinear beta regression (as in Laliberte et al. 2012) 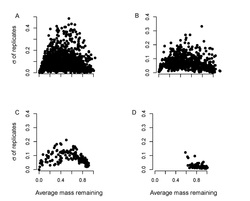 Litter decomposition rates (k) are typically estimated from proportional litter mass loss data using models that assume constant, normally distributed errors. However, such data often show non-normal errors with reduced variance near bounds (0 or 1), potentially leading to biased k estimates (see the figure, left). In such cases, the beta distribution, which is well-suited to bounded data and this type of heteroscedasticity, may provide better estimates than to standard nonlinear regression (normal errors).

Although our simulation results also suggested that standard nonlinear regression was fairly robust to violation of homoscedasticity,  nonlinear regression with beta errors may, at times, provide more accurate k  estimates. We recommend a pragmatic approach where both models are compared and the best is selected for a given data set. Alternatively, both models may be used via model averaging to develop weighted parameter estimates (Xiao et al. 2011). Code to perform nonlinear beta regression in R is provided here.